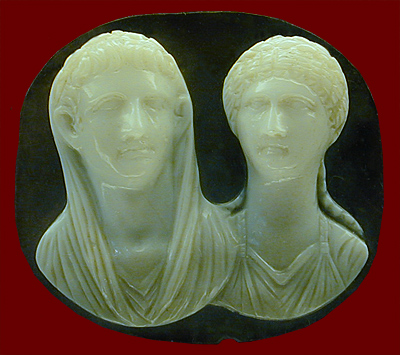 Claudia Octavia (40–62 CE) was surely the most tragic of the Roman empresses (see Tacitus' eulogy, Annales 14.63-4), a victim of the circumstances of her birth and palace intrigues. As the eldest child of Claudius (10 BCE-54 CE), the fourth emperor of Rome (41-54 CE), and his third wife and niece, Valeria Messalina (20-48 CE), she was a descendent in the imperial Julian line through both parents. Octavia and her brother Britannicus survived their mother’s execution in 48 CE to come under the supervision of their stepmother and great-aunt Agrippina the Younger, who seduced and married Claudius in 49 CE in the hope of obtaining the emperorship for her son by her first marriage to C. Domitius Ahenobarbus. The young Octavia was already betrothed to L. Junius Silanus, a descendent of Augustus, an arrangement Agrippina sabbatoged in 48 CE. Octavia was betrothed instead to Nero and adopted out of her family to avoid charges of incest when Agrippina persuaded Claudius to adopt Nero as his heir. Octavia's marriage to Nero in 53 CE proved mutually distasteful according to Tacitus (A.13.12), as evidenced by her public silence in the face of his insults and flagrant liaisons, particularly with her maid Acte. At a public banquet in 55 CE, a year after Nero became emperor, Octavia impassively witnessed the death of her brother, rumored to be from poison. Her doom was sealed after Nero ordered his mother's death in 59 CE; their major conflict concerned her support for Octavia and her objection to his affair with Poppaea Sabina. Despite popular demonstrations against Poppaea, in 62 CE Octavia was divorced on charges of first adultery, then sterility. She was quickly removed to confiscated estates in Rome, then to Campania, and finally to the island of Pandateria (Ventotene), where the unfortunate young woman was executed; as proof of her death, her head was sent to Rome, where images of her were removed or defaced.
SOURCES: The principal Latin source for Claudia Octavia is Tacitus' Annals, Book 12 (48-54 CE), 13 (54-58 CE), 14 (59-62 CE). She appears only briefly in Suetonius' Life of Nero 35.1-3. The Octavia, the only Latin history play (fabula praetexta) to survive in its entirety, compresses the final events of her life into three days in June '62. The philosopher-statesman-author L. Annaeus Seneca (1 BCE-65 CE) was long considered its author, but both internal evidence and stylistic considerations place the play in the early Flavian period after the death of Nero (68 CE). No one, however, has successfully established the identity of the author, although several names have been advanced. For further information on the play see in the Bibliography: Boyle (2008), Ferri (2003) and Wilson (2003).

The Octavia contains 982 verses: the dialogue is written in iambic senarius, the choral odes and lyric parts are written in anapestic dimeter. The principal scenes are: between Octavia and her nurse (lines 1-272), between Seneca and Nero (lines 377-592), monologue of Agrippina's ghost (lines 593-645), between Poppaea and her nurse (lines 691-761), Octavia's lyric laments. This selection is from the prologue to the play which contains echoes of both Greek and Senecan tragedies. In the speech which follows, Octavia responds in passionate rejection of her nurse's simple advice that she "oblige" Nero.

Click on the underlined words for translation aids and commentary, which will appear in a small window.