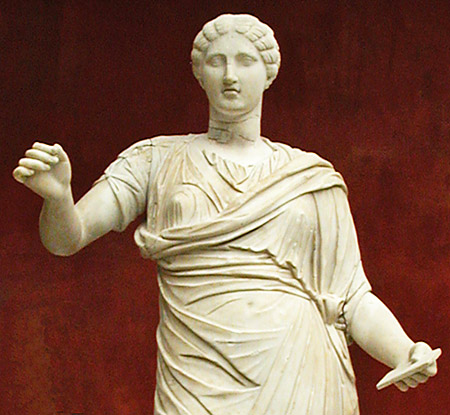 Were it not for Pliny's letter (c. 101-103 CE), Corellia Hispulla's identity would have gone unrecorded. Her mother was named Hispulla (see women's names); her father was Corellius Rufus (c. 30-97 CE), a consul suffectus in 78 CE, distinguished friend and mentor of Pliny (see Ep. 1.12; also, in Ep. 4.17 Pliny refers to Corelli filia as needing his advice in 105 CE to defend herself in a lawsuit). As many a successful father had done before him (see Hortensia), Corellius doubtless had his daughter educated beyond the traditional minimum for girls, if only to make her more interesting to a politically ambitious suitor or to prepare her to raise sons for public service. During the Empire, girls of Hispulla's class would have acquired more than domestic skills (see Saturninus' wife); some, encouraged by their husbands, would have continued their studies after marriage (see Calpurnia, Pliny's wife). It is unclear which of the two Neratius brothers from Saepinum Hispulla married, Lucius Priscus or Lucius Marcellus; they both served as consul suffectus at different times. She bore a son, Lucius Neratius Corellius Pansa, consul ordinarius in 122 CE, who achieved the career for which his mother so carefully planned. Whether it was culturally expected that the early 2nd century CE materfamilias would arrange her adolescent son's rhetorical education, Pliny writes to her as though she had sole responsibility for this decision. He addresses his remarks to a woman he considered intelligent, rational and moral, who was sympathetic to the suggestion that her son's education include the development of character as well as the techniques needed to succeed before the rostra and in politics. Hispulla continues the tradition of educated elite motherhood set much earlier by women who raised great sons, such as Cornelia, the mother of the Gracchi, Aurelia, Caesar's mother, and Atia, Augustus's mother. In seeking or accepting Pliny's counsel, Hispulla showed her political astuteness, for with this exchange she forged a relationship for her son with a noble statesman and imperial favorite. For more information on Hispulla and the education of women, see Carlon, Pliny's Women, Dixon, The Roman Mother, Hemelrijk, Matrona Docta.

Click on the underlined words for translation aids and commentary, which will appear in a small window.